Returning to the Vietnam beret flash, worn by the 5th SFG(A) between 1964 and 1985, acknowledges the Group’s extensive history in the Vietnam War, the first large scale combat employment of U.S. Army Special Forces. 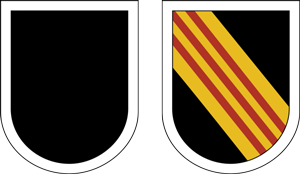 “I am proud to announce that the 5th Special Forces Group will honor our history by officially changing the unit’s beret flash back to the one utilized by 5th Group during the Vietnam War.” said Col. Kevin Leahy, commander of the 5th SFG(A). “The Group’s 20 Congressional Medal of Honor and three Australian Victoria Cross recipients are a testament to the courage and honor of those trail blazers.

Returning the yellow and red stripes to the 5th Group flash honors the Group’s history and all of the Special Forces Vietnam veterans who served under 5th Group, including over eight hundred 5th Group Soldiers who made the ultimate sacrifice.” Additionally, said Col. Leahy, “This change simply returns stripes to our current flash, it takes nothing away. This change ties the history of the group in Vietnam to our more recent history in the Gulf War, Somalia, Afghanistan, Iraq and the continuing battle against ISIL.”

According to official Army records, in October, 1964, the 5th SFG(A) Commander, Col. John H. Spears, petitioned the Department of the Army to officially approve a modified 5th SFG(A) flash with diagonal yellow and red stripes. These stripes were added to the black and white 5th SFG(A) flash to represent 1st and 7th Special Forces Groups, which sent teams to Vietnam in the early days of the conflict. Additionally, the yellow and red stripes were the same colors as the Republic of Vietnam flag and served to honor Group’s commitment to its Vietnamese and Montagnard partners. The request was approved in December 1964.