A Brief History of How the Special Forces Association was Formed

In May 1964, I came back from the Republic of Vietnam (RVN) with my A Team and was assigned to the 5th Special Forces Group S-2 shop at Fort Bragg, NC. After a week, I was called by the Group Commander, COL Roye, old OSS Soldier and a friend. He assigned me as the commander of Detachment C – Delta, on a temporary status, until a field grader could be made available. So as a Captain, I then took command of Team Delta and my SGM was Gregory Mateo. I had old SF types in the team such as Montgomery, Seyer, Yosich, and many others. With these NCOs around, I had no trouble running the C Unit.

At the end of May, SGM Mateo and a group of NCOs came into my office and presented me with the idea to form an organization for Special Forces members. I agreed with them; after all, organizations were in place for Airborne, OSS, etc. I showed them the monthly newsletter that I had just received from the British, French, and Belgian SAS. SGM Mateo and MSGT Montgomery took the lead and I joined them in presenting the idea to COL Roye. The COL was all for it and told us to go to the 18th Abn Corps for final approval.

When we got together to discuss how to run the organization, many ideas surfaced. They were all NCOs and insisted that ten years in SF assignments should be the base for membership. Other qualifications were presented and accepted: OSS; 8240th Army Unit; Operation White Star. Discussion was
also made about what we would call each other. I proposed that we call each other by rank (British influence). I never forgot the reaction to that! Mateo just said, “NO WAY!” There were about 20 of us there at that meeting.

Now I want to say, if credit has to be given to any one individual for the formation of this organization, it should go first of all to “Doc” Montgomery. He succeeded in getting the first By Laws written and accepted by the 18th Abn Corps. 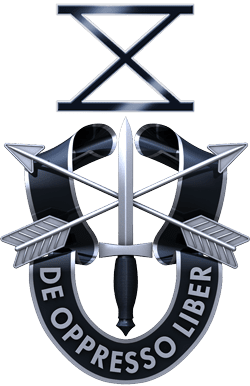 At our second meeting, about 40 of us got together. The name “Decade” was introduced and accepted. We were to be known as the “US Special Forces Decade Club”. (Again, British influence… “Special Forces Club”, London, UK). Discussion went into what numbers should be given to individuals. Here came my surprise when Doc Montgomery came to me and asked me what number I wanted. I said “#7”. He said, “You got it”. To my amazement, they all lined up after me. Mateo #8, Montgomery #9, and so on. One of the reasons that I chose #7 was that I thought that some officers senior to me and qualified for Decade should have the low numbers. I remember presenting a list to Montgomery of who I thought should have the #1 to #6: Herbe Brucker; John Striegel; Pete Walkonski; Louis Conein; Sam Amoto.

Here are some of the names that I remember from the first two meetings, which took place in the day room of Detachment C Delta: Mateo; Montgomery; Seyer; Yosich; Linchoten; Xaiden; Licon; Vukovich; Nolte; Shevchenko; Manuel; Hoskins; Bizaillon; Borkowski; Dean; Fafek; Ruddy; Davis; Grant; Mancuso; Duffield; England; Waugh. Sorry if I missed some. They were all NCOs and none of them took a number below #7.

“ IF CREDIT HAS TO BE GIVEN TO ONE INDIVIDUAL FOR THE FORMATION OF THE ORGANIZATION, IT SHOULD GO FIRST TO ‘DOC’ MONTGOMERY ”

If I recall correctly, Major “Crafty” Croft arrived and took over the C Team in July 1964 and I took over B-41 and prepared for deployment to RVN. At a third meeting of the organization, I was asked to be the President. I had to decline, since I had just received orders to the 7th SF on a classified mission. Mateo told me that he would keep the ball rolling. But I must say that after that meeting, I lost track of the organization.

In August 1964, I received an “SF Decade Association” certificate dated August 15, 1964, signed by Daniel Weddington, Secretary. I wondered who had changed the name and who the President was. But I felt that the organization was moving ahead, since they were issuing certificates.

After my TDY, I came back to 5th SF, took command of my B Team, and deployed to RVN. Now in the middle of 1965, I heard through the rumor mill that because all of the original members had rotated, the Association was not doing well. That is when I asked Herbe Bruckere to become involved. Herbe was an old friend who after years in the RVN AID program, was ready to go back to Bragg and retire. I explained to Herbe the reason for the Association and told him that he was more than qualified to join. (He was in the OSS from 1943 to 1945; 10th SF from 1952 to 1957’ UW Department from 1957 to 1960; and White Star from 1960 to 1962.) Since Herbe was making his home in Fayetteville, I thought that a steady presence would be the major factor for future success. Herbe told me that he would look into it and keep me posted in the future.

And that is when the Association, for all practical purposes, started to be a viable organization. Herbe and his wife Lilo started a monthly newsletter and put all their efforts to the benefit of the Decade Association. Lilo single handedly typed all the letters and mailed them to the members, at least until 1972. I remember the newsletter of February 1972, because Herbe congratulated me on the birth of my son.

I feel that we do owe a lot to the late Herbe and his wife Lilo. They put their talent and their perseverance into starting the Drop, which is now a revered publication. Herbe started the BBC section based on the WWII communication system that the British Broadcasting Corporation established to communicate with the underground in occupied countries. It later became the “Bugged Bami Bi” beer can for RVN sake.